Fishing GUADELOUPE from the shore : Snook and Trevallies on spinning 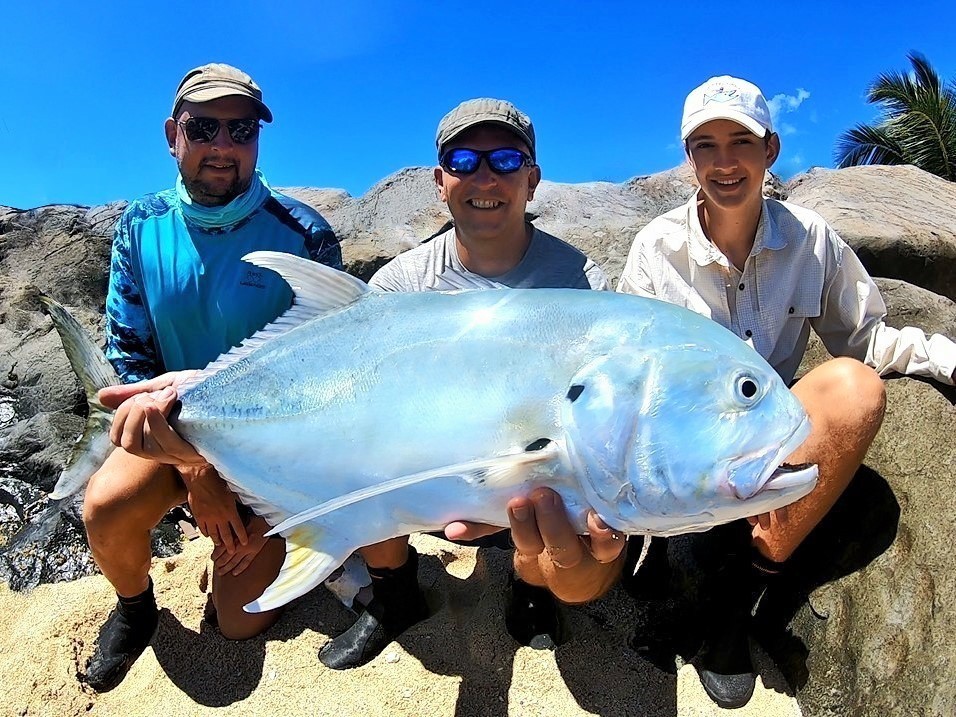 Anders contacted me to lure and/or fly fish for 3 anglers, in the mangroves if possible, from a boat or kayaks. This guy already has some experience of fishing in Florida (therefore the Caribbean fish species that I fish here), and knows how the weather conditions and the behavior of the fish change very quickly. He trusts me as a professional guide, to quickly adapt to the local settings !

The day before this session, following my fishing of the past few days, I finally suggested that he goes fishing not by kayak, because the conditions were not suitable, but on foot from the shore.

After the usual briefing, I tell everyone to cast the lure that I have taken care to choose in order to allow me to identify their level of lure fishing. As my father said, “A carpenter by trade can tell quickly whether or not a person has experience driving a point, just by observing how he holds his hammer…!”.

Small adjustments are made and prospecting begins. Very quickly, we happily meet fish on the hunt. One of the fishermen, Anders, does not take long to hook a first big snook, who greets us with beautiful jumps and the adrenaline rises… He follows my advice and ends up bringing the fish back to the beach. I seize this specimen by the mouth, estimated at 13 pounds (6 kilos), a nice photo, then we release this brave fighter !

In the process, Kristian, the youngest of the three, also caught his first Guadeloupean snook, then it was Thomas’s turn to do his on the fly. Perfect!

A few hours later, it is still the youngster who stands out. This time taking out not one but two trevallies…on the same cast ! One caught by the head hook and the other caught by the tail hook of the same lure, a not so trivial anecdote !

The day continues when we arrived at the approach of the last sector. The fishermen are well placed and cover the area.

After a few minutes, I observe magnificent trevallies pass in front of our fishermen on the lookout. Only one of them thought he saw something thanks to my observations. Too late, the fish are moving very fast and are already gone.

Luckily for them, they twice passed close to the coast… in vain ! The first 3 attempts fail !

Shortly after, my eye is caught by a hunt breaking out on the surface within casting distance, I quickly give direction to the nearest fisherman. Thomas executes quickly, doing his best to respect the distance and the direction that I indicate to him while taking into account a strong side wind. This time it’s the right one ! The fish attacks its lure and goes very fast out to sea, emptying its reel !!! I see Thomas can’t believe it ! With these tropical species there is no respite. I guide him by telling him where to put his feet, and above all by anticipating the trajectory of the fish, and the right actions to adopt. Following this sporting fight, I grabbed this magnificent trevally by the tail in order to immortalize this moment. We’re releasing the last predator of the day that gave us all so much fun !

A big congratulations and a big thank you to my 3 fishermen of the day for their trust and their listening !

Once again, my pleasure will have been to pass on my experience of sport fishing for these tropical species based on hundreds of days already spent near these Caribbean waters. Because although I like to catch a fish and achieve the most beautiful images possible, my main interest, as a fishing guide, is to inculcate how to catch ANY fish, while respecting a sporting ethic, and to do so ” progress” those who show their confidence in us ! As I often say to the fishermen that I accompany (this being said of course with all the necessary modesty): “on the other hand, I would not put the fish at the end of your line, you also have to know how to listen to advice, and the more you will be with me, I mean “listening to me”, the faster you will progress ! As for the choice of place, time and technical aspects, don’t worry about it, trust me, “my interest is not that far from yours” / lol ?!, let me be your guide !!! “