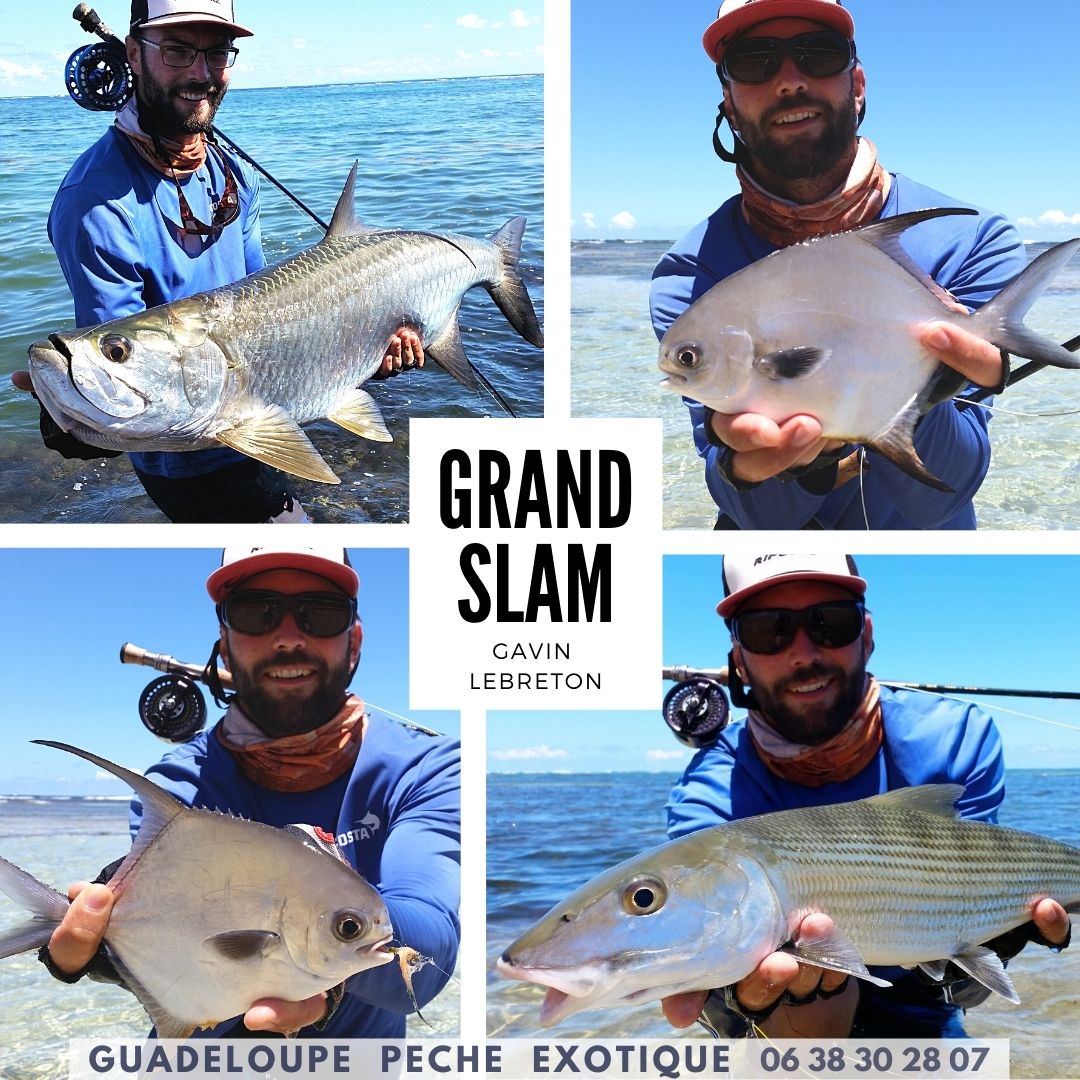 2020, a year “like no other”, for many of us, made up of highs and lows … I am no exception to the rule because for me, the guiding ended with the lockdown.
However, it is also for me “Guadeloupe-Peche-Exotique.com” the year of particularly “intense” moments ! Indeed, as a fisherman, I made my 1st GRAND SLAM “made in France” ! This name, recognized by the IGFA (International Game Fish Association), congratulates the catch and release on the same day, on fly, of these 3 prestigious species of “sport fish” : Bonefish, Tarpon and Permit. The fishing environment, the fighting spirit and “intelligence” of these species make this Grand Slam particularly sought after by all passionate fishermen !

At the end of January 2020, I have completed already with an excellent american fisherman, the SUPER GRAND SLAM, caught on flats, bonefish, snook, tarpon and permit in 24 H. On Guadeloupe territory, it was already really “something” ! You can imagine the huge pleasure for me to have contributed to this page in the (little !) history of fly fishing in France ! This already made me the happiest guide… Today it is the fisherman who exults, because, without exaggeration, the number of french fishermen who realized this dream each year, regardless of the destination, must be counted on the fingers on both hands, and maybe even with just one ! The last Grand Slam made in Guadeloupe dated from 2007 and had been taken from a boat. So it was for me one of the best days of my fishing life ! Could this be the sign that a new territory would lend itself to the realization of this fishing dream, to take in one day a bonefish, a tarpon and a permit !?

Back on this unique moment : that day, because of the weather conditions, I had decided to fish for bonefish, nicknamed also the “ghost of the flats”, this fish being particularly known to blend in perfectly with its environment, and therefore very difficult to spot. The fact that it is almost always on the move forces him to be particularly efficient in his speed of execution! It is also, proportionately, the “fastest” inshore fish of all ! The large average size of the bones and the typology of the flats in Guadeloupe (a mixture of turtle grasses and always sharp rocks) do not facilitate the task during the fights! Armed with my “house” fly, I stepped on the flat and kept an eye out for any sign of a bone. After 30 minutes without noticing any activity, I suddenly stop at the sight of a school of a dozen of fish. Those feed on the bottom and hardly move forward. Despite the wind, I cast and managed to gently land my fly nearby, without spooking them. The action does not go as planned because at this precise moment, a wave arrives and the fish start to “surf” this one. Fortunately, two of them are still reachable. They suddenly decide to accelerate in my direction. To avoid being spotted, the distance between them and me must no longer be reduced. My line is still on the surface but no longer quite in their path. At the sight of it, they could run away in a fraction of a second and by consequence, definitely frighten all the others. I take this last chance, I step back and strikes very quickly at the same time. I make a snatch without splash and take care to put my line again in front of them. One of the two sees my fly, I strike, and here we are, let’s go for a spectacular fight ! I managed to avoid all the pitfalls and ended up grabbing a nice specimen accusing + or – 5 pounds. Great !

I release this pretty bonefish and continue my quest. My eye sees after a few minutes, several shadows moving in a basin of sand ! Approaching, I can see the black of their caudal, they are not bones but a school of permit ! This fish have a solid reputation for being very difficult to bite, certainly the fiercest fish in the world ! They are also unbelievable fighters ! These, small, are therefore in the middle of the flat. This rarely happens because this specie likes the chance to vanish in deep water at the slightest warning of danger. They look like they’ve found something to eat and the depth of this pool makes them stay there. Maybe not for very long ! My personal fly, an imitation of shrimp, has allowed me to take some of these famous permits in the past. From fear of never seeing them again, I decide to cast on them without further delay. The height of the water around this basin is very low. Barely just 1 foot. The goal of the maneuver is therefore to land inside this 3-square-meter basin but not in the middle of it, otherwise I will frighten everyone. I throw and landed a little too short first, my fly can’t get over the ledge, I have to over cast fast so that it doesn’t get caught in the grass. At the end of the 3rd cast, however, I managed to land a small permit.

After taking a photo and releasing it, I look at the pool again and see that the rest of the school is still there! I cast on them again and managed to take a second fish !!

I’m happy but at that point I hope I can catch a slightly bigger permit. I would try for another 30 minutes or so to spot one but unfortunately without success. Indeed, the two permits I caught that day were very small. I regularly observe “trophy” permits weighing more than 20 pounds here in Guadeloupe ! But for me today, size doesn’t matter / lol ?! Besides, a permit is a permit, right ? In this specific case, does that suit me because I tell myself that the inaccessible “Inshore Grand Slam” may be within my reach?

The time to change equipment and regain strength (there is nothing like a good, typically Creole Bokit !) Here I am in search of the third and final specie : tarpon.

The fabulous “silverking”, as the americans call him, is one of the predators that more than one fisherman dreams of on the planet. Her gorgeous silver dress is matched only by her skill, speed, and ferocity in battle ! Taking a tarpon from the shore and on fly is a challenge that once again requires mastering many parameters of sport fishing ! My encounters with this fish, moreover with large subjects of more than 5 feet, which we heard very little about 4/5 years ago in shore fishing here in the french west indies, are starting to be numerous, and I am starting to really understand their habits and reactions. When I get to the water’s edge, however, I feel a certain pressure. I fish from rocks and am in the right place for a chance to spot one. After only twenty minutes of watching while “heron” and casting while fishing “blinded”, all of a sudden I see a first tarpon “rolling” on the surface at a good distance. No sooner has the fish mounted, than it disappears in the slightly tinted water ! I anticipate his path and throw a few yards in front of where I saw him. I let it sink a little, I streak, I now arrive at the level of the bank, I see my fly rise to the surface, I make a last pull with only my rod in case … and there, a beautiful tarpon emerges from the bottom, like lightning, and grabbed my fly ! Badly surprised at this last moment ! He makes his first rush, jumps like “any self-respecting tarpon” does, shakes his head and … takes off immediately ! Aaaahh no !!! He was there ! You should know that when you fish this specie, you ended the fight on average with a capture only on one or two occasions out of 10. With experience, you can improve this average a little and increase it to 1 fish out of 5, sometimes less! Well, let’s hope it’s only a delay ?! I go back to fishing. About ten minutes pass and I catch a glimpse, in the murky water, of two dark figures of good size just below the surface. They are slowly moving right at me ! Alright, I’m in luck, you can’t miss it !!! I cast, the fly lands in front of one of the two, I strike, he calls, boom, big strike, successful this time ! Here we go again ! The fish enters an intense fight, he jumps and takes the lead, I end up on the backing ! A good half-hour fight follows with this tarpon of nearly thirty pounds, but after having already fought much bigger (5 foot and half/about 100/120 lbs)), I must say that this one doesn’t really worry me ! I finally get it out of the water. YEAH !!! My Grand Slam is done ! I’m on a little cloud !

This story, which I have shared with you here, does not intend to make me appear “smarter” than others, but just to relate all the joy that comes from experiencing the intensity of a same day. Each of these species requires its share of parameters to discover in order to make them react to flies and overcome these overpowered fighters. In this text, we understand that on several occasions success was due to few things, details that make us “conclude” positively or “screw up”! The stalking when you fish specifically on sight (that is to say by seeing the fish before attacking them) multiplying the excitement of the catch and the adrenaline rush only being stronger. I am also a little proud because my girlfriend, present with me that day, lost (unfortunatly) her 1st bone. After only a few hours of fly fishing in her life and maybe thanks to the modest advice of a guide who was hanging around the area… she managed to get her fly to bite a pretty bonefish and started the fight. The rocky bottom unfortunately put an end to these first sensations by breaking her leader. It will certainly be for next time ! This is how this momentous day ended. I hope I have given you, too, the desire to try this magnificent fishing challenge in Guadeloupe. Thanks for reading me !