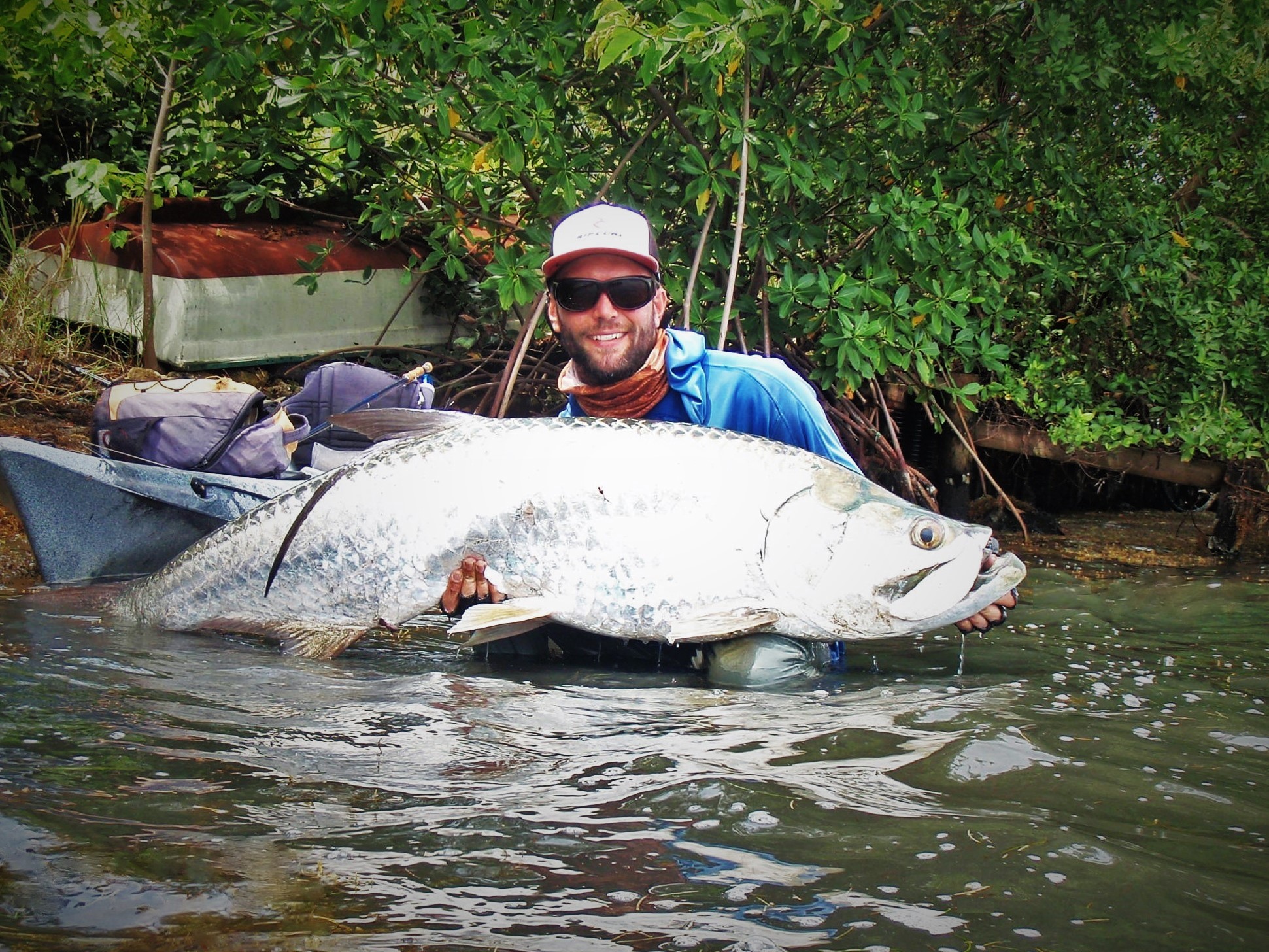 65  inches, my new flyfishing “record” !
Here is the story of this amazing day of fly fishing in Guadeloupe (French West Indies) :
I just arrived by paddling on the spot, I start to fish with lure in order to prospect “large”. First cast, I had a bite, the fish jumped and i loose a beautiful elops (ladyfish). With experience, as we tend to say in the family, when you touch a fish the first time you cast, either it will be the only bite of the day, or you will have a crazy day. I continue to sail while fishing when I seem to see a swirl on the surface in the distance. I approach with discretion and indeed I can see a tarpon “rolling”. It looks nice(for me “nice” means a size greater than 47 inches)! This is the opportunity to take my fly rod ready to fish in the back bin of my kayak.

I adjust the brake on my reel, take out the line, continue to scan the surface of the water and start the first shots. I took a fly of my creation which has already allowed me to take several big “silverkings”. Prospecting with a fly necessarily requires, because of the shorter throw distance, to get as close as possible to the target in order to offer it the fly. However, the kayak is without a doubt the ideal boat to stay discreet.

I know that tarpons are very rarely static fish. So my strategy is to understand the perimeter they cover during this round. But if they detect our presence, they can just “flee”, meaning that they simply left the premises in a few seconds! I take care to take visual landmarks and by dint of seeing them roll, I think I have noted their circuit well. I think I’m at the right place to have a chance.

Despite an unbelievable start of the session, here I am fishing now, believing it hard ! This time, I feel that it is the right place, despite I “fish the water” without seeing fish appearance. When my fly arrives near my kayak, I see a tarpon rolling 50 feet in front of me, oh my G…! New landing, my fly lands not far in front of him, I strip and BOOM, big bite, sanctioned with a powerful strike !!! It’s off for the festival ! The barely bitten fish jumps like a crazy horse ! I can see right away that he must be very close to 60 inches ! I was ready for a long fight ! I manage it properly, my kayak floats and letting the fish just tow me, allows me to tire it without consuming too much energy (well everything is relative / lol) ! Almost an hour has passed and finally, on yet another jump … this tarpon comes off, like that, for no apparent reason. Aaaaaaaaahhhh noooooo ! Disgusted …
Okay, in my head, how do I say … it’s “fair” ?! In the past, I had once lost an even bigger fish that had broken my fly line by leaving in the roots of mangroves filled with shells after 30 minutes of fighting. But there, after an hour, without knowing why … “you become crazy”!

However I saw the bottom, sand almost everywhere except maybe this little beach covered with small sharp shells on which it must have rubbed! It does not play much with these fish with bone-hard jaws like glass and ultra combative !
Come on, we don’t let it get us down ! I eat a piece, drink a big shot of cool water (too early for the “ti-punch” / lol!) And we go back hoping to be able to see the rest of the tarpon school ?!

At this precise moment, I still believe in it and I still hope to get a bite a little more fish, how to say … “smaller” lol !
The fight made me drift a hundred meters. I replace myself, without fishing and I observe. Perhaps the “mess” he made during the fight moved the whole group of tarpons ? All of a sudden, 2 tarpons rolling there. I paddle a little and place myself a little upstream. I throw, I strip and … WHOO, huge bite. It’s good to hold your rod well, I tell you !!! It makes me the same start of fight as the previous one ! Like all its congeners this tarpon jumps at the start of the fight, but having touched several of these large specimens, perhaps because of their mass, I know that they are not necessarily those who make the most “aerial” fights . And this one … even bigger! This tarpon keeps jumping ! An intense fight is on its way ! After 30 minutes, he can still jump. I came across an “Olympic high jump champion” !!! It is not won in advance!
He takes me from right to left, goes around the kayak and understands that where there is the least pressure, it is under the boat and there remains “stucked” for long minutes. Finally leaves when I could believe that the fight was over, in short… he is tireless! I even wonder, by furtively seeing my fly if it is not snag by the top of the head? That could explain his extraordinary defense …
The fights often drag on with these big tarpons, especially on fly or spinning equipped only with single hooks when these do not seriously injure the fish, and it is the mind of the fish against the fisherman’s mind !

Well after all, that one, he doesn’t know that he has a former judoka of almost 6’2 confirmed on the other end of the line / lol ?!

After a hard fight of more than 2 hours, I begin to see signs of fatigue in it. I see on the coast a very small space on which I will have my feet and where I could get off my kayak. To give him freedom in good conditions means, even for a “souvenir” photo, to get him out of the water no more than a few seconds !

After these steps, crucial for the future of this fish, I hasten to swim with it to re-oxygenate it. Yes, we need energy in reserve to allow these extraordinary fish to continue their life after such a waste of energy !
He ends up going away as usual, a sign of good re-oxygenation.
Bingo ! A “megalops atlanticus” from Guadeloupe weighing more than 110 pounds is added to my counter ! And by the way, he was stung by the mouth! It was just a super powerfull fish /lol!

I hope one day to be able to make you live these same strong emotions, here in Guadeloupe.
And for those who fear to live such a fight, don’t worry, there is smaller lol !

This tarpon was caught by kayak and on fly. My previous record since this type of boat and fly dated 2 years ago and measured 60 inches. Last year, I caught a fisherman i was guidaing caught a fish of 66 inches, from the shore on lure and I established in the same way my personal record “tarpon” all techniques and approaches combined at 67 inches (132 pounds) ! But don’t we say that “records are made to be broken”? This leaves us sweet dreams to fulfill …

Thanks for reading me.
And as we say here … A dan on dot soley (See you soon) !