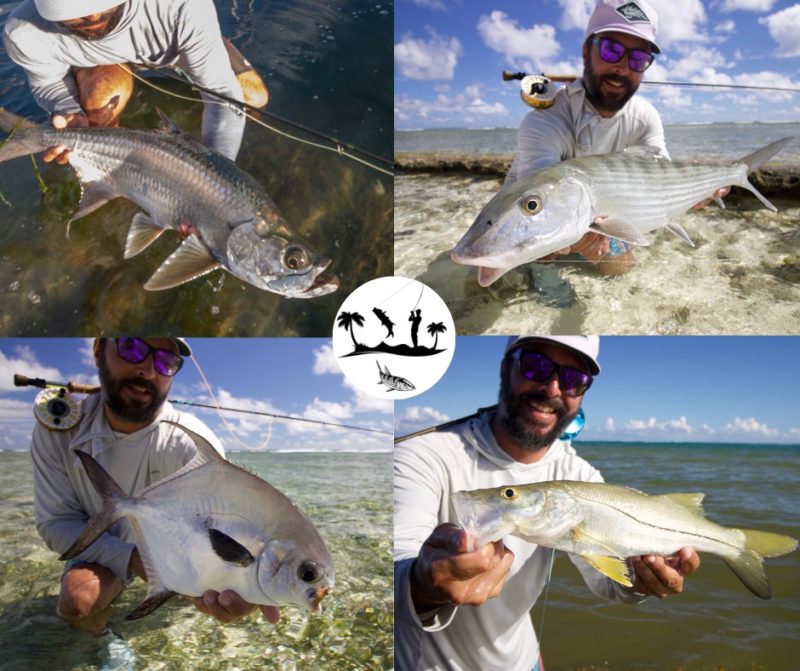 We hear about “grand slam” and “super grand slam”, from boat, in Florida, Bahamas, Cuba or even in Mexico … but much less “from the shore”, and in the French West Indies (“Guadeloupe”, in french !)
It all starts with a great meet, Paul Sonnen, a very talented fly fisherman !
He decides to call on my professional fishing guide services over 2 days, despite his great experience as an exo fisherman, something I did not know before I saw him… casting !
We attack the first day of guiding on the flats. Bonefishes and Permits are the target species, and of course on fly rod and “on sight”.
As usual, I did the necessary tracking the previous days, during my guiding days and thanks to my personal sessions outside guiding. So I try to know the best that I can, where, when and how to approach the spots according to the fishing conditions of the moment.
Before starting the session, I only know that this fisherman has the same objective as me, to make the most beautiful fish present in Guadeloupe, from the shore or kayak, here on fly, and by promoting as much as possible sight fishing.
Let’s go fishing, the hunt begins …
Paul, quickly takes his marks. After having unsuccessfully attacked his first bones, he realized that he will have to adapt to Guadeloupe waters.
Even if he knows the fishing for these species very well, each destination requires local “know how”. This is where I can provide a little from my own experience/lol…
After having talked about it and now that we are in agreement one to each other, we start again…
Without further ado, he caught his first little French West Indian Permit ! Awesome ! That’s perfect to begin ! 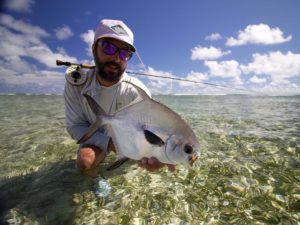 A little later, here he is harnessed to a magnificent bonefish which puts him on the backing, as they always do ! 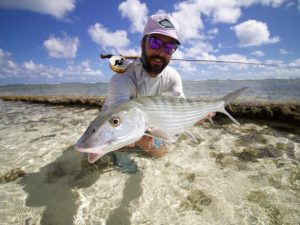 Smile, photo, release and, at this moment … a common idea crosses our both minds, and if it was THE day ?? Any fly fisherman dreams about catching the same day bonefish, tarpon, snook and permit !
Not far from where we are, we can consider making a bigger permit ! Before going elsewhere, i optimize the fishing time and decide with him to go and see if big subjects are marauding.
We see a loan permit of 11 pounds in tailing in the middle of the rocks, a little far to attack it, we move by scanning the surface, suddenly, we are left with 2 subjects of more than 15 pounds, very close to us ! He attacks them at this distance for 1 big minute with a headwind ! Without success aaarrrfff !
Then, we go in search of this 3rd species, snook and/or tarpon.
When I get to the spot, I explain how to approach it and what to focus on.
A few minutes later, we see 2 beautiful snooks estimated between 8 and 10 pounds, reachable. Paul attacks them on sight. They follow his fly but unfortunately do not take it.
Conditions are getting more and more complicated for this spot and time is running out. Someone is waiting for Paul at a specific time! We have about ten minutes left to validate this famous “big slam” !
By fishing the water, he ends up making this little snook! YEEESSSSS, you got it man, we did it !! 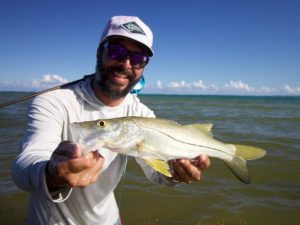 I do not realize the magnitude of the situation but we are in any case, the two of us on a little cloud !!!
Appointment the next day, the conditions are not very good at the start of the session to go on the flats. However, I know a place that can save us the day while the weather improves. We agree to try to get a tarpon.
After the usual explanations and some material adaptations necessary for “daily variations” in fish behavior, here we are on our way to a possible “SUPER GRAND SLAM”.
The tarpons are active, they give us a glimpse of some small forage fish hunts.
After a few throws, a first furtive touch is missed ! The bottom line proves to us that a big subject caught the fly. Several minutes pass, in view of the activity, I realize that the fish are moving. We are repositioning ourselves, a fish over 4ft starts to roll, we believe in it! He throws, starts to strike and suddenly gets his fly abruptly stopped! Action sanctioned by a powerful shoeing, my fisherman finds himself harnessed to a Megalops bordering the meter. He manages the fight like a leader despite the congestion in which he finds himself. We take the photos, the release is done perfectly, we are in heaven! 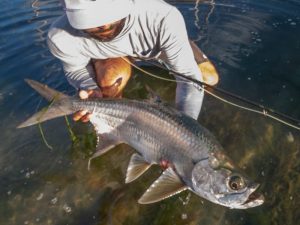 It’s done, a “Super Big Slam” in less than 24 hours! It is quite hard to put words into these emotions! It’s awesome !

Thank you to Paul for his trust and listening. I am very happy to have shared this with him !